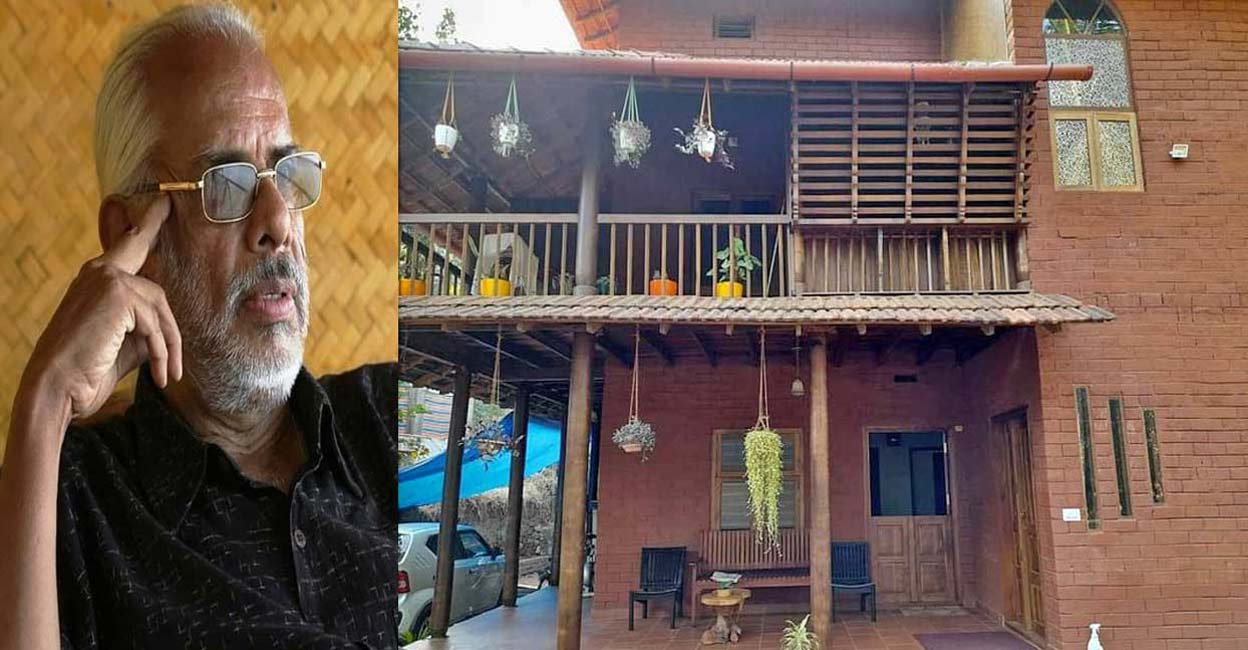 When Madhavan Namboothiri moved to his hometown of Kuttipuram in 2000 with his wife to enjoy his retirement life, he had dreamed of following a traditional lifestyle in his 350-year-old ancestral home. While he enjoyed the peaceful life in his big old traditional house, he was hampered by the growing number of concrete houses which harmed nature and depleted resources. Moreover, he was upset that traditional building methods had become a thing of the past that has no relevance in the modern era. Hills were razed and rocks were blasted and soil was extracted from rivers to provide materials to build the concrete mansions. All this inspired Madhavan Namboothiri, a septuagenarian, to become an advocate for sustainable construction in Kerala.

Madhavan Namboothiri, who retired as an assistant engineer in Maharashta’s minor irrigation department, has since researched eco-friendly homes that have coconut mud walls and roofs. He has developed a unique construction method that is not only harmless to nature, but also easy to save.

It promotes the use of compressed stabilized interlocking blocks. Sturdy coconut wood could be used for roofs while bamboo plywood would be perfect for ceilings and partitions. Blocks could be built using mud collected from one’s own backyard. The most amazing advantage of this method is that there is no need to use concrete at any stage of construction. Madhavan Namboothiri promotes his ideas through the NGO Susthira Bhavanam Foundation which was launched in 2019.

At first, the blocks were built using a machine imported from China. Up to two mud blocks could be built in three minutes like this. In addition, this machine had to be operated manually. Lock blocks have holes on both sides. These holes help cool the interiors by reducing heat. Later, a motor was attached to this machine to make it more efficient and faster. The walls that are built using these blocks have all the advantages of a traditional mud wall. In addition, it is relatively cheaper, environmentally friendly and durable.

It was in Perinthalmanna that the first project was realized using the unique building ideas of Madhavan Namboothiri. An additional floor was designed, above an existing floor, using environmentally friendly construction methods. About 7,000 blocks were made from the mud collected in the neighborhood, using the Chinese machine. These blocks were used to build a floor with an area of ​​700 square feet. Coconut wood was used to build the roof.


Even though the new method was environmentally friendly and economical, Madhavan Namboothiri had to train his workers to build the walls using mud blocks. Madhavan Namboothiri says he is happy to have been able to encourage people to try this construction method which inflicts almost no damage to nature.

It was during this time that Hamsa Kakkadavath approached him to design his dream house and find a solution to the scarcity of water in his plot. The ground was dug out and a massive reservoir that could hold up to 5,000 liters was built out of ferrocement. Greywater recycling facilities and passive cooling facilities have also been installed here. The mud that was dug out to build the reservoir had been used to make the building blocks. Hamsa is proud that his house is a spectacular example of sustainable construction. Interestingly, the expenses for building this house were much less than for building an ordinary concrete house. The 3000 square foot home has all modern conveniences. About Rs 1500 per square foot was spent as construction costs. Hamsa says the interiors of her home are so cool and comfortable that there is no need to turn on the fan even during summers.

2022-02-14
Previous Post: What is the best budgeting app for iPhone?
Next Post: Types of Loans You Need to Get Out of Your Financial Troubles Faster