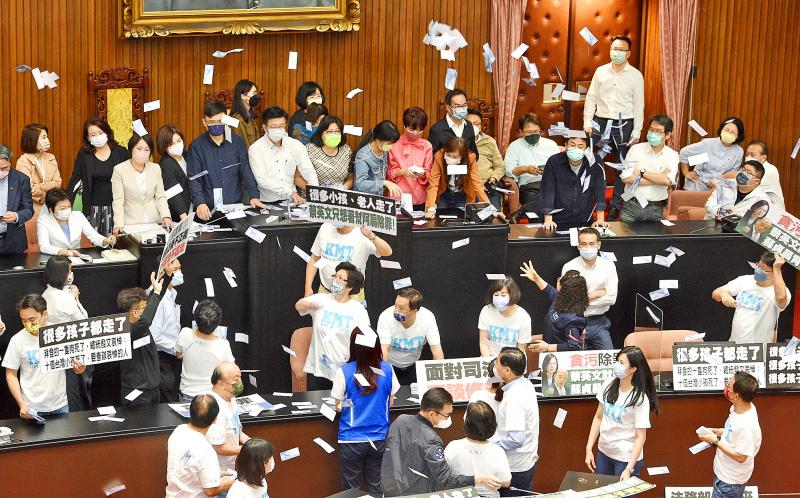 Chaos as the law on special funds changed

Scuffles:
Water cups and counterfeit money have been thrown in an attempt to block passage of an amendment that appears to exonerate former President Chen Shui-bian

The Legislative Yuan yesterday passed an amendment to exempt presidents from sanctions for misusing special funds before 2007, as scuffles over the proposal resulted in a tear in the portrait of Sun Yat-sen (孫中山) behind the podium of the speakers.

The change relates to Section 99-1 of the Accounting Law (會計法), which exempts civil servants from liability for the misuse of special allowance funds before December 31, 2006.

“Special allocation funds” are those used by officials, except the president, for discretionary public relations purposes, such as awards and gifts. They are categorically separate from the “Special Fund for State Affairs”, which is allocated by the President.

The use of the funds has been the target of corruption investigations by many officials, including former President Chen Shui-bian (陳水扁).

The defendants claim that the jurisdiction of the funds is ill-defined, which exposes them to charges of corruption.

Article 99-1, proposed by the Chinese Nationalist Party (KMT) and enacted in 2011, was widely seen as excluding the president’s special state affairs fund to avoid exonerating Chen. 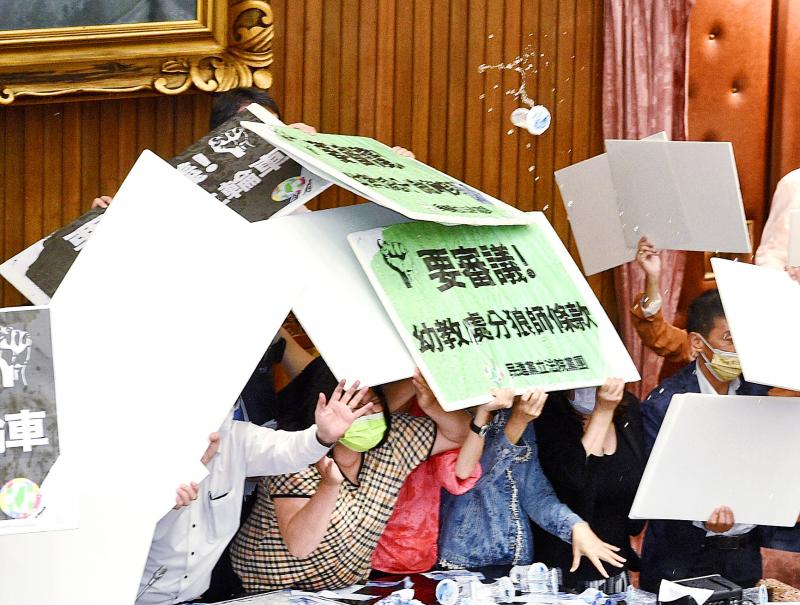 The two types of funds were separate in the 1940s and 1950s, but combined in the 1960s, the Democratic Progressive Party (DPP) said.

DPP lawmaker Tsai Yi-yu (蔡易餘) and others therefore proposed an amendment to add the State Affairs Special Fund to Article 99-1.

The KMT disagreed that the funds are functionally the same, accusing the DPP of trying to change the law to exonerate Chen. 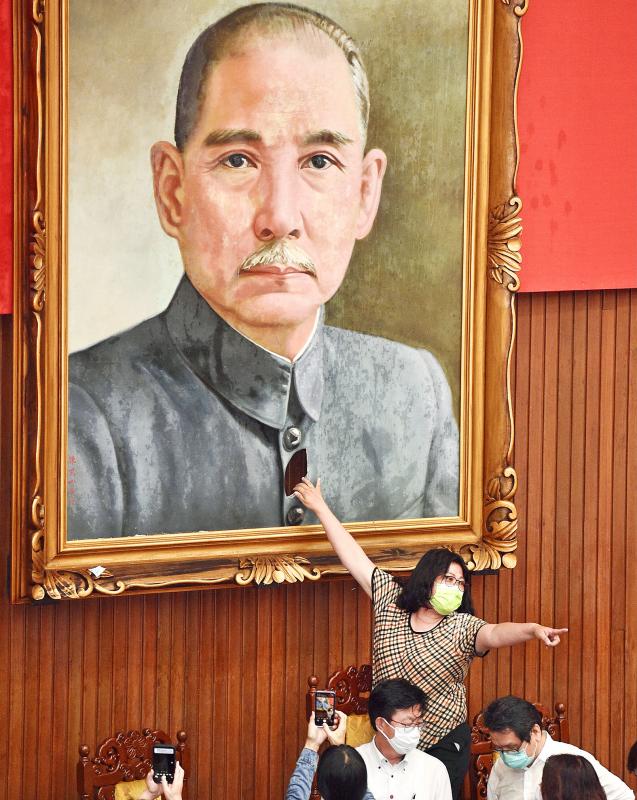 KMT lawmakers occupied the president’s podium in the morning to protest the bill. The podium was then taken over by members of the DPP.

They also threw goblets of water which lawmakers blocked with signs, one of which hit Sun’s large portrait, tearing a hole in the canvas.

The KMT caucus was unable to prevent the DPP majority from passing the proposal.

The Supreme Court said yesterday it would deal with the cases according to law.

In 1949 only Chiang Kai-shek (蔣介石) had access to special funds, but in 1951 access was extended to ministers and heads of the five branches of government, Ker said.

During the 1950s, special funds were granted to more civil servants, totaling up to 7,000, he added.

Regardless of the names of the funds, in the registry they perform the same function and are part of transitional justice, Ker said.

The New Power Party (NPP) caucus said yesterday that Prime Minister Su Tseng-chang (蘇貞昌) should use his constitutional authority to veto the amendment and send it back to the legislature for a second review.

“While we believe that stakeholders involved in the 2006 secret state affairs spending controversies have a right to seek justice through legal proceedings, we strongly oppose the DPP’s proposed amendment in reason for the case involving former President Chen,” the NPP said.

While saying the KMT set a bad legal precedent in 2013 by amending the same article to exonerate former KMT lawmaker Yen Ching-piao (顏清標) from allegations of embezzlement of public funds, the NPP said the DPP had again set a bad precedent yesterday by forcing the bill through the legislature.

Comments will be moderated. Keep comments relevant to the article. Remarks containing abusive and obscene language, personal attacks of any kind or promotion will be removed and the user banned. The final decision will be at the discretion of The Taipei Times.