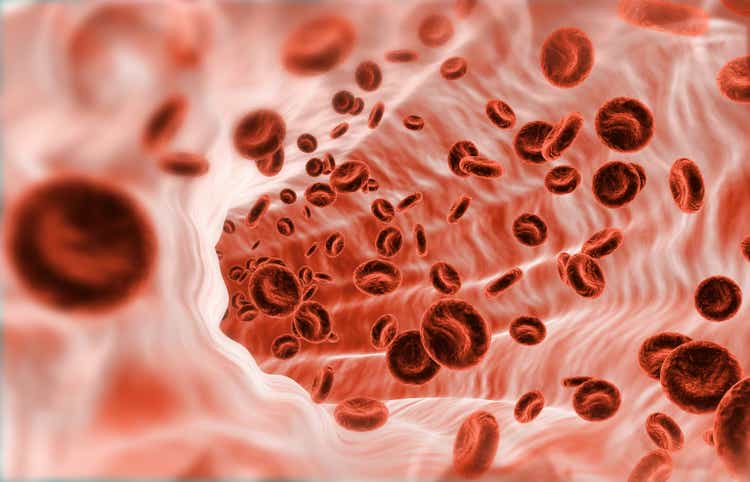 The past year has seen significant achievements and growth for Global Blood Therapeutics (GBT), which has been able to make substantial progress in raising awareness of its flagship product, Oxbryta. The company continues to report encouraging business trends that show an increasing number of patients on treatment. Additionally, the company received a label extension in December that allows Oxbryta to cover patients as young as 4 years old to increase their market. Additionally, Global Blood Therapeutics is working hard to expand Oxbryta outside of the US and is now preparing to launch it in the EU. Additionally, Global Blood Therapeutics has a strong late-stage product pipeline that is expected to accelerate growth in the coming years. Despite this progress, GBT has come under heavy selling pressure over the past two years and is now on the mend. I think the market has removed most of GBT’s premium valuation and it is worthy of a long-term speculative investment. As a result, I decided to change my GBT strategy.

I intend to review the company’s results for the fourth quarter of 2021 and its business guidance for 2022. Additionally, I discuss some of the company’s growth opportunities, as well as some of the risks to the decrease to be taken into account. Finally, I reveal why I am looking to change my GBT strategy.

In terms of cash, Global Blood Therapeutics ended 2021 with $735 million cash, cash equivalents and marketable securities thanks to the ~$384m raised through financing activities in Q4.

On the business side, the company did quite well in the fourth quarter, with the company reporting an increase in the net number of patients on Oxbryta. The company reported an increase in demand from existing and new patients with approximately 800 new prescriptions in the quarter despite a decrease in provider-patient interactions due to the pandemic and holidays. Additionally, Global Blood Therapeutics reported adding approximately 100 new prescribers in Q4, bringing the total to almost 2,000 since the launch of Oxbryta.

In terms of payers, Global Blood Therapeutics is seeing improvements and covering 90% of covered lives for patients 12 years and older living in the United States.

Second, the pediatric label extension and new formulation approved by the FDA in mid-December opened the door to approximately 15% of the total number of patients in the United States. The new once-daily oral liquid dosage form of Oxbryta is suitable for young children. In addition, 95% of children with sickle cell disease aged 4 to 11 live in geographical areas already covered by the company’s sales force. So not only does the new label expand the market, but these patients are most likely being treated by targeted prescribers.

Third, Global Blood Therapeutics is seeing some of the previously interrupted patients resume treatment with Oxbryta. This is a good sign for the company as it can still be optimistic about dropouts.

Fifth, the Company’s pipeline, including Inclacumab, the Company’s P-selectin inhibitor for VOC reduction. Inclacumab is now the subject of two phase III studies. The company’s next-generation hemoglobin polymerization inhibitor, GBT601, has been shown to have the prospect of being a top-notch treatment capable of achieving more than 30% mean hemoglobin occupancy with no safety signal detected at 100 mg daily dose. GBT601 is more powerful than Oxbryta but at a much lower dose. It is possible that GBT601 has the potential to provide a functional remedy in a once-daily pill. Global Blood Therapeutics is on track to start a phase II study in middle of the year. So it’s possible that Oxbryta’s biggest competition is actually internal.

As with many newly commercialized biotech/pharmaceutical companies, Global Blood Therapeutics presents more than a few downside risks that investors should be aware of. First and foremost is the possibility that Oxbryta may not reach its full potential and that Global Blood Therapeutics may have to tread water until its other pipeline candidates come to market. Indeed, the company’s entire pipeline could be overwhelmed if any of the SCD gene therapies are able to produce a functional or actual cure for the disease.

Another lingering concern is the impact of COVID-19 which has reduced in-person contact for patients and sales reps. Indeed, the pandemic numbers seem to be improving, however, it is possible that another variant will appear in the future that will reduce interactions. Obviously, this could have a negative impact on profits.

In a previous post on GBT, I explained how I left my GBT position untouched after taking profits on Oxbryta’s endorsement. At that time, I was happy to put on the GBT drawer and come back 5 years later. However, I decided to change my strategy due to the sale which made some additions in anticipation of Oxbryta’s growth and company milestones which would support the stock price. Shortly after this article, I decided to change my approach to a value-based approach based on the potential valuation of the company buyout and was looking for a potential reversal setup to start accumulating. Well, we haven’t seen a quality reversal setup, and as a result, I’ve been sitting on my hands, as GBT has been mostly chopping for the past seven months.

I plan to make tiny fortnightly additions for the remainder of 2022. Additionally, I will use some buy targets to ensure I continue to accumulate at an acceptable valuation.

Right now, GBT is still a bit overvalued for its short-term outlook, so I’ll be looking for an acceptable value for a buy target and a discount buy target. The acceptable valuation (Buy 1) will use a combination of Street’s low-end annual revenue estimate for 2025 ($442 million) in combination with the industry average sales price of 5x, with a discount for the weather. Using these metrics, I got a buy target of $22.

The updated valuation (Buy 2) will use a combination of Street’s low-end annual revenue estimate for 2025 ($442 million) in combination with the industry average sales price of 5x, with a discount for time and error. Using these metrics, I got a buy target of $16.60. I intend to set up buy orders just above these target prices.

Using this hybrid strategy, I slowly accumulate with my periodic buy orders, but I will have increased orders in place just in case the market or the overall sector wants to drive GBT lower.

Overall, I remain optimistic about GBT’s long-term projections and will take a central position in the expectation that GBT becomes the leader of the SCD and/or the company is acquired at a higher price.