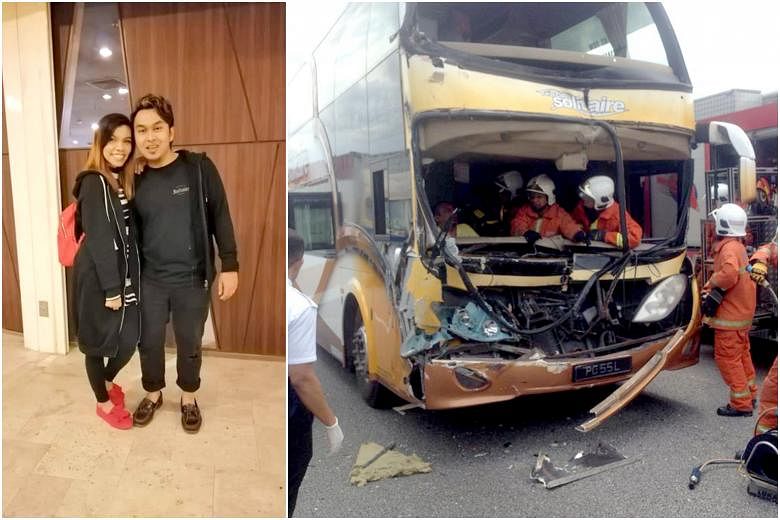 SINGAPORE — The family of a woman who died after being thrown from a tour bus in a 2018 crash in Malaysia will receive around $650,000 in compensation after the High Court case is resolved.

The court, which issued brief oral reasons earlier this month on the assessment of damages, took into account the life expectancy and career retirement age of the Singaporean to determine the claims sought by his estate.

Ms Serina Mat Idris, then 27, was on her way to Genting Highlands to celebrate her third wedding anniversary with her husband, baby boy and other family members when the accident happened on December 7 2018.

Ms Serina, then a pre-school teacher, was sitting in the front row of the double-decker tourist bus when the impact of a collision with a lorry in Negeri Sembilan threw her out the front window, resulting in life-threatening injuries. .

In December 2020, the defendants accepted 100% responsibility for the death and hearings to assess damages were held last year before Judge Kannan Ramesh.

Mr Sumidja, represented by lawyers Niru Pillai, Rapinder Kaur and Phang Cunkuang of Niru & Co, sought claims for loss of dependency such as the income she allegedly contributed to the maintenance of the family and the loss of legacy such as funds that would have accumulated in her Central Provident Fund (CPF) account had she lived.

Transtar, through its attorney Chan Chin Ling of Dentons Rodyk, agreed with the broad method of assessing the claims but differed on the specific inputs, Judge Kannan noted.

The judge accepted that her retirement age would have been 62, after hearing from both sides, and factored in the increase in her earnings as she would have been promoted to head teacher this year.

At the time of her death, she was an educator at a branch of a chain of preschools, Sparkletots.

The judge awarded $522,228 for the loss of dependency, calculating the sum based on his projected annual income earned after tax, based on five progressive bands from ages 27 to 62.

Judge Kannan noted that both parties had agreed that the son was still a minor and would be considered a dependent until he turned 25.

He agreed that once the son reached 25 and was no longer a dependent, the deduction from Ms. Serina’s net salary should be increased from 25% to 33%.

The percentage deduction should reflect the part of the salary that Ms. Serina would have used as a personal expense.

The net salary after deduction is then used to deduct the base figure to be multiplied when calculating the amount to be awarded for loss of dependency.

2022-01-30
Previous Post: The cost of keeping Prince Harry and Meghan Markle safe in the UK could be ‘huge’
Next Post: Is Broadridge Financial Solutions (NYSE:BR) using too much debt?