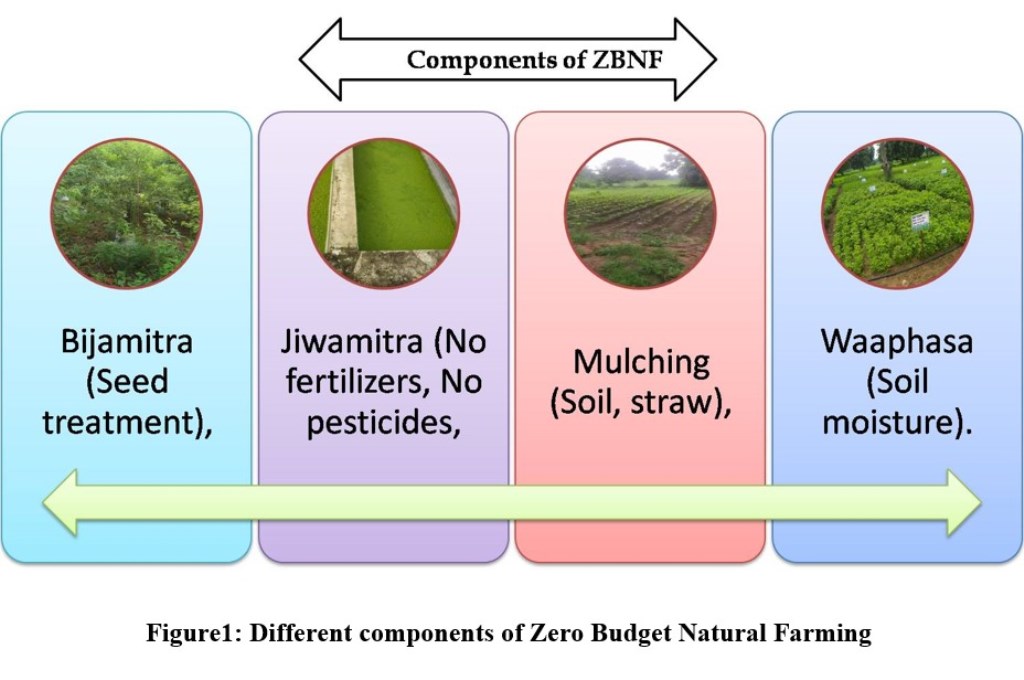 Considering these many advantages associated with the system, the government has shown interest in widely promoting this platform at every street corner. Different aspects of this agricultural system have been presented in this article.

As the name itself includes Zero Budget i.e. zero credits and no expenditure on inputs in the production system. It is a kind of natural agriculture, that is, growing in nature without using chemicals. It is therefore a chemical-free farming system method based on conventional farming practices. Farming practices without chemicals are encouraged. This practice is the transition from the application of chemical nutrients to alternative natural inputs. This method provides a platform to eliminate the need for expensive fertilizers and pesticides and thus prevent soil degradation and also conserve water resources and thus ultimately reduce the cost of production inputs. Our traditional cultural practices can be used in the best possible way towards a chemical-free farming system. This innovative model is based on the model of agro-ecology (Khadse et al., 2019). More than ever, it also provides a better platform to move towards sustainable agriculture (Tripathi et al., 2018).

This practice was originally introduced by the farmer Padma Shri recipient Subhash Palekar in the mid-1990s. He promoted it as an alternative to the green revolution method. He claimed that the main reason for indebtedness and suicides among farmers in our country is the cost of external inputs such as pesticides and fertilizers. Thus, by implementing traditional methods, the cost of inputs will be reduced.

According to the founder of this innovative model, the natural agricultural system is based on four pillars (Fig. 1):

The first element is based on natural seed treatment, which will help prevent seed-borne diseases in crop plants. Second, the component relies on the exclusion of the use of fertilizers and pesticides in the agricultural system. The third component based on mulching which protects soil conservation and the fourth component is the conservation of soil moisture and therefore improving the efficiency of water use by crop plants.

Why we need it

Our agricultural system is more occupied by small farmers, for whom seeds, inputs and privatized markets are expensive and inaccessible. Due to these high production costs and high interest loans, Indian farmers are subjected to a cruel cycle of debt. Therefore, this ZBNF, which means zero investment and zero expenditure on agricultural production inputs, will be a boon for farmers. The repeated use of chemicals makes the land unsuitable for agriculture. Here in this model, environmentally friendly and sustainable approaches are encouraged (Devarinti, 2016). Therefore, reliance on ecological and sustainable approaches in the agricultural production system will also help us to tackle the problem of climate change.

The reduction is for farmers’ investment, not their production, so farmers can earn a lot of money. The main advantages associated with this agricultural system are that it protects the soil from degradation. Groundwater levels can be improved as they prevent overexploitation of groundwater. Some early adopters claim higher yields and low cost of cultivation. The low cost of inputs has a huge impact on improving farmers’ yields. The Food and Agriculture Organization of the United Nations has also proposed that the ZBNF provides a better platform to reduce the lending burden on farmers, which could help deal with the vicious circle of debt among farmers. farmers. This innovative system is also one of the components of a way to achieve the goal of doubling the income of farmers by 2022. This system promotes the traditional system of the agricultural system and is therefore associated with all the advantages linked to traditional agriculture (Biswas, 2020). Some of the main advantages associated with the system have been presented in the (Fig.2).

Government push towards this system

Even though, the ZBNF was highlighted earlier by then Finance Minister Nirmala Sitharamam in the first budget speech of the 17th Lok Sabha in July 2019, where this approach was offered as a source of doubling farmers’ incomes by 2022. However, currently, this method is high on the government’s agricultural agenda. Recently, Prime Minister Narendra Modi pushed ZBNF in Varanasi, December 14, 2021 and said it should become a mass movement and people should be made aware of its benefits. Moreover, PM modi also promoted it while addressing about 5,000 farmers in a farewell speech during the National Agro and Food Processing Summit in Anand, Gujarat on December 16. . The central government has also sanctioned support for converting an additional four lakh hectares of cropland in eight states to use the ZBNF technique.

The central government has approved support to eight states for the implementation of ZBNF under the Paramparagat Krishi Vikas Yojana (PKVY) programme. Of the eight states, Andhra Pradesh showed the greatest interest in implementing this innovative model project, followed by Chhattisgarh and Gujarat (Bharucha et al., 2020). The Indian Council of Agricultural Research (ICAR) is studying this method at different research institutes including Modipuram (Uttar Pradesh), Ludhiana (Punjab), Pantnagar (Uttarakhand) and Kurukshetra (Haryana), assessing the impact on productivity, l economics and soil health, including soil organic carbon and soil fertility.

Association of a large number of benefits with this innovative model attracts several investors towards the implementation of this large-scale project. PM also promotes the benefits of ZBNF and the implementation of natural farming. Preventing farmers from the vicious cycle of debt and there after reducing farmer suicide can be achieved with the reliance on this platform for agricultural production.